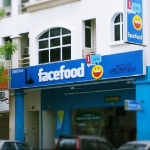 An Instagram influencer has gone viral after revealing she kisses strangers in front of iconic landmarks to create romantic travel photos.  The 23-year-old posted a series of photos on Twitter, the first of her in front of the Eiffel Tower, Paris, with the caption: “I hope this guy I met at the Eiffel Tower and asked for a pic of us kissing so I could pretend I had a romantic time in Paris is doing good.”

Heartbroken blonde beauty Kristina Kuqi, began the unusual tradition on a trip to Paris after a messy breakup. Scared of missing out on the romantic Eiffel Tower shot she’d always wanted, Kristiana, from Kosovo, approached the first attractive man she saw for a smooch in front of the camera.

“My ex-boyfriend and I were going to travel to Paris together, amongst other places.

“When we broke up, I had to rethink my initial plans.

“I’ve always wanted a picture kissing at the Eiffel Tower.

“So, I got there with one of my girlfriends and we were taking so many pictures because it was my first time in France.

“I’m looking around and I see a gorgeous guy and think to myself ‘you need the romantic picture you’ve always wanted and now is the chance’.

“When I told my friend I was thinking of asking this guy for a kiss we both started freaking out about it.

“I just approached him and asked if he had a girlfriend and he said no.

“I was looking at him, trying my best to keep my cool and asked ‘will you kiss me right there in front of the Eiffel Tower for a picture’, and in the coolest manner he just said ‘yes, of course’.”

And the fireman who responded to a fire at a wedding i was at in Kentucky. Hope he’s good too <3

“I always made sure to put on a good ChapStick, lipstick, or gloss beforehand,” she said. “I think that made them notice my lips and definitely want a kiss. I’ve never had a bad kisser – each time it was natural and passionate.”

Kuqi said she plans on taking photos of herself kissing strangers for as long as she travels and is single.

But don’t expect to see her do it everywhere she goes. “It really has to be the right moment,” she said. “And the right person that I spot.”

I got my own apartment in Europe today

Kuqi recently shared her kissing photos on Twitter, where they received more than 500,000 likes at the time of writing